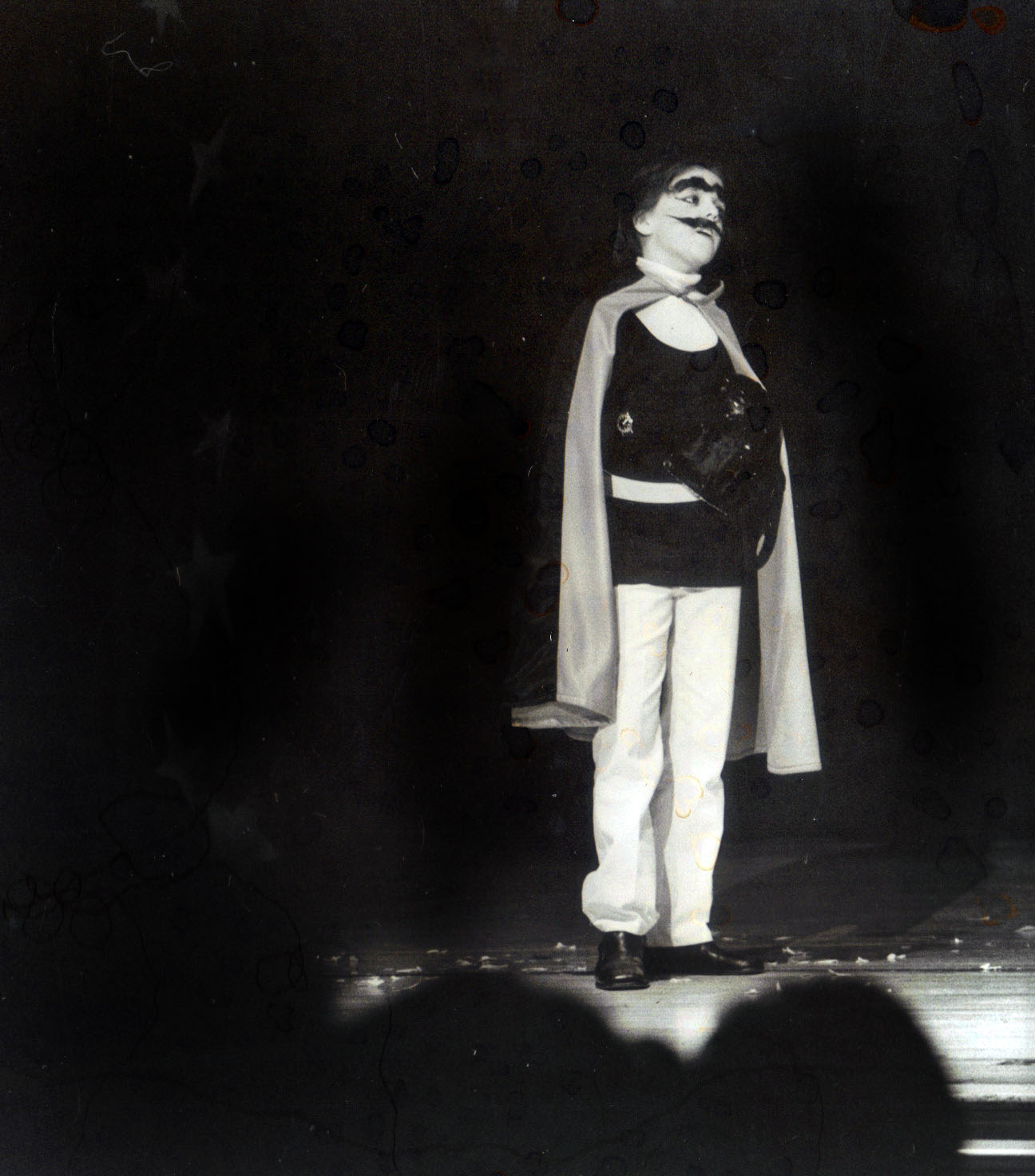 Zounds! In early 1981, I was a dastardly thirteen-year-old intergalactic villain who spent his afternoons in the 25th Century rehearsing how to be evil. True story.

As an eight-grader at Smyrna Middle School that year, I was a member of the repertory cast of “The Frazier Street Players” – the school’s drama club and believe it or not during this time I may have somehow, somewhere earned the reputation of being a bit of a clown – a very immature obnoxious child who relished playing the part of the fool. Along with my friends Ben Mace and Jay Diaz, I could usually be found crawling in the aisles of the school’s auditorium pretending to be one of “The Drama Club Detectives” solving imaginary mysteries instead of doing any serious rehearsal on stage during drama class.

Perhaps because of this reputation, I was never offered any major leading roles in drama club productions as a seventh-grader. That year I was relegated to humorous supporting roles like “Old Man with a Shopping Bag” in “Charley’s Charmers”, “Second Analyst” in “Guess Who’s Coming to Earth Tonight” and “Grandpa Peapatch” in “Nashville Jamboree“.

Our drama club adviser was Smyrna Middle School art teacher Nancy Vodvarka Finch and she was my all-time favorite teacher and I was one of her all-time favorite goof offs. I would regularly beg her to take me seriously and to give me a starring role but as we began the 1980-81 school year,  I started eighth-grade doing the lights and sound effects during out first production that year “The Ghost Who Came to Dinner”. The lights and sound effects?! I wasn’t even given a speaking role.

During the second performance of “The Ghost Who Came to Dinner”, I reached an all-time low. Near the end of the play, a character came to a door and rang a doorbell. I was stationed in the balcony with the spotlight and I was to hit a button on a tape recorder and play a cute door buzzer sound effect. Simple.

And then, it happened. That night, the tape recorder didn’t work. “What the heck?!” “What do I do?!” What did I do? I panicked. Then I did something that seemed like a good idea at the time. I made a deep annoying “buzzer” type noise with my voice to replace the charming “ding dong” sound effect. It sounded like a diarrhea-ridden duck being strangled under water. The entire audience stopped watching the play, turned their heads and gazed upon the goof off in the balcony who just killed a flatulent duck.

The next week during drama club class, Mrs. Finch reviewed the production and our performances giving well-deserved praise to the actors. Afterwards…my favorite teacher told me…in front of the entire cast…that I had “set The Frazier Street Players back ten years” with my panicked response to the tape recorder mishap. “What were you thinking?!” “Did you even think?!” In an attempt to save the day, I ruined 3,650 days of hard work. My days as a The Frazier Street Player were numbered. I was done.

Then…something happened. Our next play was a science-fiction production…“Lost In Space and the Mortgage Due” and I begged Mrs. Finch to let me play one the lead characters – the villain “Commander Snidley Backlash” – a part I was born to play. My best friend Ben Mace was to play the hero “Space Cadet Bob of the Twenty-Fifth Cen-Cen-Century!” – a part he was born to play. I told her I wanted to redeem myself…and she agreed.

The play was written by a guy named Tim Kelly and published by Eldridge Pub. Co. (June 1, 1979)  It was set in the 25th Cen-Cen-Century and sniveling Snidely Backlash wants to steal a farm from some old people because he knows that under the soil there’s some of the richest rocket fuel ever discovered. With it he can control the galaxy! Space Cadet Bob hopes to pay off the farm’s mortgage with his latest invention, a rocket that goes sideways. The lovely heroine, Rosa Budd, fresh from the Metropolis City Poor House and Collection Depot for Used Space Suits gets tied to Space Cadet Bob’s rocket by yours truly to be launched to another planet. Perfect casting! Mrs. Finch agreed. 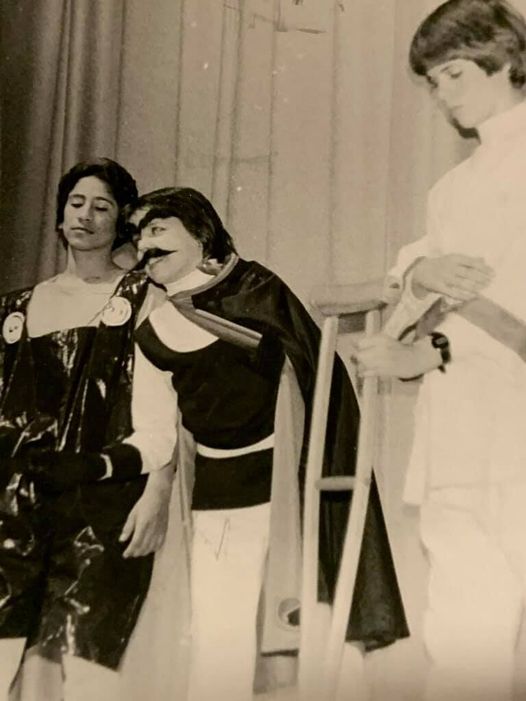 13-year-old Frazier Street Players, from right, Ben Mace as the heroic Space Cadet Bob of the 25th Cen-Cen-Century, Dave Chambers as the despicably evil Commander Snidley Backlash, and Jay Diaz as the dimwitted space hillbilly Farleigh Dimm perform on stage during the sci-fi comedy play “Lost In Space And The Mortgage Due” in March 1981.

In the script, the author’s notes state: “Assorted weirdos arrive and depart the stage in a storm of funny lines, mad chases, and zany complications. This play can be done with just a few chairs for props. In fact, the tackier the scenery and costumes, the better.” And that’s just what we did.

The sets that were constructed were simple flats painted black with huge stars stenciled with white paint. The stage was filled with few props, a chair here, a desk there. Very minimal. Most of the characters in our version of the play wore trash bags. Yes, trash bags. The only characters who wore actual costumes were Space Cadet Bob, Commander Snidley Backlash, Rosa Budd and Backlash’s evil assistant Evilina Craven.

And we were responsible for designing and creating our own costumes. Ben chose to wear white for his hero character, paying homage to Luke Skywalker in “Star Wars” and I chose a black top and black cape for mine, paying tribute to “Darth Vader” and I made a Darth Vader-style helmet for myself using papier-mâché and painted it black. As a matter of fact, I chose to play the part as a cross between Darth Vader and the Hanna-Barbera mustache-twirling cartoon character Snidley Whiplash. Therefore, another key aspect of my costume was….the mustache.

The cast and crew rehearsed the production for two months and in early-March 1981, it was showtime. This was it – my chance for redemption.

During the first night of the play, things were proceeding according to plan. Ben Mace was the heroic hero he’d always been, Jay Diaz was killing it as “Farleigh Dimm” – a not-so-bright space rube and Kim Miller was perfect as “Evilina Craven”…who actually played her part more evil then mine. Aletha Solloway was cast as “Rosa Budd” and she was forced to kiss yours truly during a scene. I’m sure she dreaded that.

And then…it happened. During one scene midway through the performance, my mustache (which had been carefully applied with spirit gum) fell off my face and onto the floor in front of an audience of 100 people. This may not seem like a big deal to you, but to me it was akin to standing in my underwear in Times Square with egg on my face. I was mortified. It was the worst thing that could’ve happened. “What the heck?” “What do I do?”

This time for some reason, I don’t know why, I chose not to panic. Conjuring the spirit of a veteran showbiz comedy pro, I simply picked up the mustache, put it in a drawer of the prop desk which sat on the stage and said in a loud clear voice “These damn toupee mustaches!” and slammed the drawer.

It was the biggest laugh of the night. Actual profanity! Folks afterwards told me they thought it was part of the play….they thought the line was scripted and that the mustache was supposed to come off. Best ad lib of all time!

After I said the infamous line, I was a bit flustered on stage and stumbled on a line or two. I vividly remember Ben (as Space Cadet Bob who I shared the scene with) looking at me as if to say “C’mon, man. You’re screwing up. Remember your lines!” But I recovered and the stage lights went dim and the scene was over. And then I breathed.

As I walked off stage with my mustache in my trembling hand, I was met by the open arms of Mrs. Finch. She was overjoyed. She hugged me and said “You just earned an A+ for the marking period with that one ad-lib!”

The mustache was back on my face during my next scene but with double spirit gum this time. (it hurt like heck when it was ripped off my smiling face afterwards) And in the end, Space Cadet Bob saved Rosa Budd and her family’s space farm, Backlash and Evilina were defeated and I never got to shoot Rosa sideways into outer space on the rocket. But I made a hundred parents, teachers and kids laugh. And I made my favorite teacher proud.

After the play was over, Mrs. Finch told me “You just set The Frazier Street Players twenty years ahead, Mr. Backlash”. The next (and final) play we did was in late May 1981 – “Frankenstein Follies” – a scary musical with Ben, Jay and myself as the three lead parts. “The Drama Club Detectives” had become the stars of the show, I did get that A+ and still to this day, certain people still call me Backlash. And I owe it all to those damn toupee mustaches.

To view the actual script, visit: http://www.epc-library.com/freeview/f_1002.pdf. You will not find the line “These damn toupee mustaches!” anywhere in it.