The Untold Legend of the Floatbusters 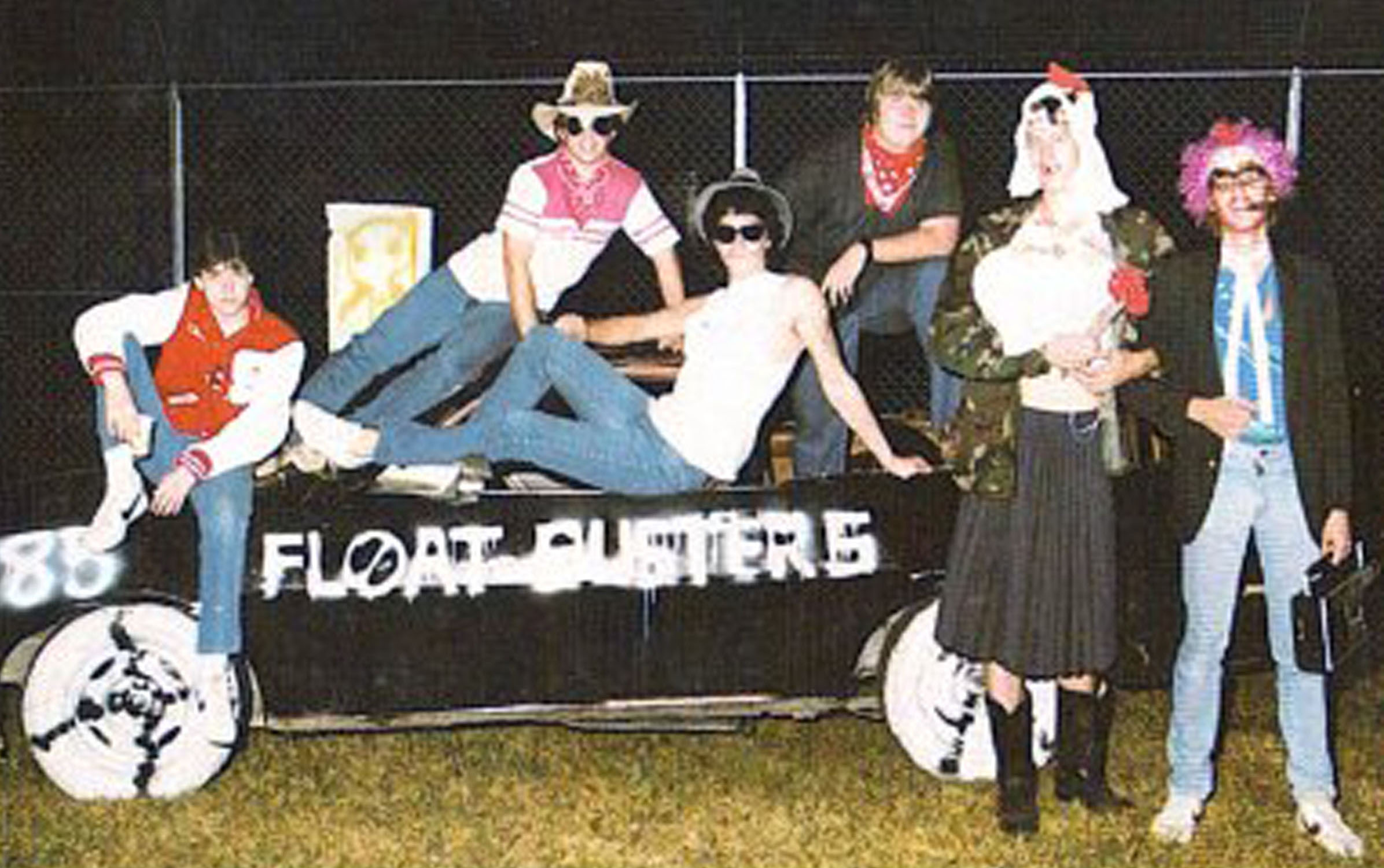 I’ve been asked many questions in my life. Questions like “What is your problem?”, “What the h*ll is wrong with you?”, “Where do you get off?” and my personal favorite “Do you really think this is funny?” are often asked of me but the question I’ve been asked the most would have to be “What exactly is a Floatbuster?” I usually get asked that in the month of October.

It’s a simple question with a really complex answer. Or some may see it as a complex question with a really simple answer. It involves a group of seventeen-year-old class clowns always on the lookout for that one big prank. One that would not only resonate throughout their entire school but one that would echo throughout the entire community – one that’s beloved, one that’s legendary.

Here, for the first time, just for you, allow me to answer that age old question once and for all and tell you…the untold legend of The Floatbusters.

These three students had been referred to by SHS assistant principal Clarence “Buddy” Lloyd as “the three most diabolical minds at this school” earlier that year so this remark shouldn’t have been taken lightly but Bialecki and Chambers chuckled and didn’t give it a second thought. That is until the bell rang and Gelof said “You know, my father just gave me this old car that’s just sitting in our yard.” There is now a light bulb over all three heads.

Homecoming is Friday. Maybe they’ll be punished….but it’ll be worth it – just this once.

The car in question is a 1974 orange Ford Pinto hatchback and it belongs to Gelof.

They could tear it up by driving it in fields and its sh*t would most definitely be beaten clean out. What if they painted it black and used it to go around to the other classes’ floatbuilding sites and bust up their floats? Building Homecoming floats is serious business in the town of Smyrna and the competition to win “Best Float” is intense to say the least.

The boys are inspired by the 1978 film “National Lampoon’s Animal House” and it’s infamous “Deathmobile” scene wherein the frat brothers use Flounder’s brother’s car, “modify it” and drive it in the Homecoming parade creating complete chaos much to the chagrin of school officials, parade watchers and parents.

It is decided…Gelof will provide the car Wednesday after school.

The car’s roof is cut off off with a hatchet. The windshield shatters. After the car has been converted into a convertible, the car is left at Bialecki’s house for the night. Ideas seem to be coming from all directions – what to do, where to do it, how to do it, whom to do it to. Why do it? They’ll be punished but it’ll be worth it – just this once.

Chambers skips a full-days’ worth of classes. He spends his entire Thursday in the art room creating a huge stencil. After school, Chambers goes to the Acme supermarket and buys six cans of black spray paint and one can of white. “What are you going to do with all this paint?” the cashier asks Chambers. “Paint a fence.” he replies. “I don’t believe you.” says the cashier. Chambers arrives at Bialecki’s house at 4pm.

With three cans each, Bialecki and Chambers proceed to color the orange car flat black. Bialecki makes a small flag out of construction paper that he tapes to the car’s antenna – it is white and contains a crudely painted skull and crossbones in gold.

After waiting 17.5 minutes for the paint to dry (which it never seems to do), Chambers unveils his stencil. It simply says “FLOATBUSTERS” and the “O” is in the style of the “Ghostbusters O”. They tape the stencil to the sides and use the can of white to paint the name onto the car. However, the white paint drips down the freshly painted black. “It looks eerie.” remarks Bialecki as he happily paints the wheels white.

Waiting another 17.5 minutes, Bialecki can wait no longer – it is time to debut the car in public. Gelof, ironically, is nowhere to be found this night as he is in Wilmington taking a SAT prep course. Bialecki has the keys and the guts…Gelof’s ‘74 roofless, spray-painted Pinto has a full tank of gas and a date with destiny.

Bialecki and Chambers drive to the warehouse in Smyrna where the senior class is putting the finishing touches on their Homecoming float. Upon arrival, ten members of the gang quickly stop being bored fluffing tissue paper and start being excited as they climb aboard for the ride of a lifetime. Bialecki gives up the keys to Donnie Blow who immediately proceeds to snap off the turn signal arm and toss it out the window leaving the car to forever flash its left signal light.

All ten passengers have black paint somewhere on their body and some are dangerously close to the sharp jagged metal edge where the roof once was. Two ride up front, three in the back seats and six to seven in the rear feeling the cool night air on their faces as they drive backwards through the McDonald’s drive thru.

Blow surrenders the keys to Mark Harvey who drives out of town to a yard of a certain female classmate and proceeds to do a series of donuts in her front yard destroying a perfectly manicured lawn.

No floats are busted this night and even though the maiden voyage lasts maybe 90 minutes, it and the laughter and the freedom and the pure joy seem to last forever. The gang is dropped off back at the warehouse around 9pm and Bialecki drives the car back to his house.

This is just the opening act, the main attraction is Homecoming and it’s less than a day away.

Bialecki drives the car to school Friday morning and it’s the topic of conversation the entire day as slack-jawed students can’t really believe what they are seeing. Gelof sees the car for the first time and his vision is now complete – except for one thing…what if they could actually ride in the parade? They’ll be punished but it’ll be worth it – just this once.

This year’s Homecoming seems special as just about every student from each grade is wearing red clothing and red makeup with red colored hair. After the 7th period Homecoming pep rally, most of the senior class runs to the parking lot to take a ride in the instantly infamous car. So many students are piled in and on the car that it becomes a safety hazard due to the aforementioned jagged metal edge. They only do one lap around the parking lot before Gelof drives the car to the start of the parade route where the gang is to meet that evening hoping to be included in the lineup. They have another scheme in place to ensure their spot in the parade.

They create their own Homecoming Queen candidate. Donnie Blow dons a skirt and cowboy boots, a mop head and two giant balloons and becomes Erma Butz, a toothless late addition to the list of Homecoming Queen candidates. John Bialecki wears a blazer, white tie and a plastic bald wig with purple hair on the sides as her cigar-smoking escort (and brother) Earl Butz. Instead of a Corvette, they will ride in the parade in what was now being called “The Floatbuster”. Gelof will drive wearing a white t-shirt, black sunglasses and a fedora. Vince Davis and Matt Varanko wear cowboy western gear as they ride as passengers. Chambers, not in costume, rides along holding Bialecki’s boom box which loudly plays the song “Louie, Louie” – another nod to the inspirational “Animal House”.

To the surprise of just about everyone, school officials love the idea. The car and new queen candidate are allowed in the parade! Teachers love it. Just this once the gang’s arch-enemies actually seem to approve of their mayhem. Not only do they approve it, they actively encourage it. Parade watchers love it. Blow’s balloons make even the most serious Smyrna citizen smile. Parents love it.

No one in Smyrna had ever done anything like this before. No one has ever done it since.

The Floatbuster follows the queen-candidate-carrying Corvettes and is the final entry in the 1984 SHS Homecoming parade. Gelof follows the parade route to the high school and is unbelievably waved into the football stadium by assistant principal Clarence “Buddy” Lloyd. He proudly parks the ’74 Pinto in its rightful place…next to the Homecoming floats just outside the gridiron.

At halftime, The Class of ’85 wins the float competition fair and square, Erma Butz is not crowned Homecoming Queen and Gelof finally gets to drive his dream car into a field…the football field…and he tears it up by doing donuts on the 50-yard-line next to floats that never got busted. This memory and the laughter and the freedom and the pure joy seem to last forever. It was worth it.

The Floatbusters receive no punishment – just this once.

/flōtbəstər/ (noun)   an irreverent prankster that breaks, destroys, or overpowers something.