A cool wave, also known as a cold spell or a cold wave, is a weather phenomenon where the air cools and temperatures drop below 20 degrees Fahrenheit for a long period of time.

44th President of the United States Barack Obama waves to yours truly as I take his picture in January 2009 in Wilmington, Delaware.

I was a photojournalist with the Delaware State News from May 1, 2006 – April 30, 2016. Ten years exactly to the day. Ten very long years. Almost like a jail sentence. Ten years without parole.

In that time, you’d think I would’ve acquired a number of interesting stories that I could look back on fondly now that I’m no longer incarcerated and living back in the outside world. Tales that I could happily share with others as I reminisced about my days in the journalistic pen.

Well, I don’t. It’s all a blur. A ten-year-long haze of me coming and going, frantically rushing and never knowing. When you spend ten years doing everything as fast as you can and worrying about everything, things are bound to get a bit blurry. There weren’t too many times where I managed to stop and enjoy it, where time seemed to slow down and where I was almost frozen in place.

Hmmm. Perhaps there is one story to tell. One where time stood still – a moment frozen in time.

Barack Obama was elected as the 44th President of the United States on November 4, 2008. Three days before his first Inauguration Day, Saturday, January 17, 2009, then President-elect Obama embarked on his historic Whistle Stop Train Tour from Philadelphia, PA to Washington D.C. and one of his stops along the way was to be in Wilmington, Delaware.

I was assigned to go to Wilmington and to take photos of President-elect Obama, his wife Michelle, Vice President-elect Joe Biden (formerly Delaware’s senior U.S. Senator) and his wife Jill as they arrived in Wilmington to speak to hundreds of people who would be gathering in a park near the city’s train station.

The event was open to the public and was due to start at 1:00 p.m. and the media advisory I was given requested that members of the media arrive at 6:00 a.m. That morning I awoke around 4:00 a.m. and proceeded to get dressed. Oh, one thing I forgot to mention was that the weather forecast for that was day was grim. It was going to be cold. Ice cold. Freezing cold. Freaking freezing cold. Frigid.

My wardrobe that morning consisted of three pairs of socks, sweatpants underneath of jeans, three t-shirts, one sweatshirt, one huge sweater, winter coat, gloves, boots and a winter hat. I also had a few of those chemical hand warmers – the kind you unwrap, shake and stick in your gloves. As I drove the 40 miles from my house to Wilmington in total darkness at 5:00 a.m., the weather forecast on the radio said the temperature was 6 degrees Fahrenheit. Six. I was instantly depressed upon hearing this news and I was dreading this assignment.

I should also mention that in early 2009, I was still pretty green as a photojournalist. I wasn’t very experienced, and my equipment wasn’t exactly state-of-the-art. As a matter of fact, I didn’t even have a telephoto lens at that time. I was borrowing a friend’s…and his wasn’t that good. But it did the trick. So, not only was I probably going to freeze to death, I more than likely wasn’t even going to get any decent photos either.  The situation seemed hopeless even before I arrived.

“Is this even worth it? I could get killed.”

I was the second member of the media to arrive. There was a photographer from the Washington Post there before me. There were also members of the Secret Service skulking about in the darkness. Shadowy silhouettes in trench coats. It was almost surreal. Me, a very inexperienced guy from a very small newspaper with some pretty amateur equipment and some very experienced guy with the best equipment money can buy from the Washington Post standing together in the dark…in 6 degree weather…in Murder Town USA, waiting for the next president of the United States to arrive.

As arctic winds cut us to the bone, it was just us two alone on a platform meant for the photographers. Clearly, we were the only two members of the media to arrive that day who took the media advisory seriously. As the sun came up, the temperature stayed the same. It was six degrees the entire day. This was the coldest I have ever been in my entire life – no exaggeration.

“Is this even worth it? I’m going to get frostbite for sure.”

After two hours or so, other photographers, TV camera people and reporters from across the nation started to arrive.  The good thing about arriving early was we got to pick our spot on the platform – dead center facing the stage. The bad part was that meant that we couldn’t leave or we’d lose our spot. We had to stay frozen in that exact spot…in 6-degree weather…until the President-elect arrived.

My new buddy (you become fast friends in situations like this) and I came up with a plan. There was a building nearby where the media could go inside and use their laptops, make cellphone calls, and warm up during the day. After a few hours, the windy winter weather became unbearable. So, my Washington Post pal and I would go inside in shifts. I’d go inside and warm up for 30 minutes while he held my spot on the platform, then I’d go back outside and do the same for him. This plan worked for about two more hours until the platform became jam packed with press. There were hundreds of reporters and photographers in Wilmington by 11:00 a.m., each fighting for the best spot on the platform. So, after trying to get the chemical hand warmers to work (which mine did not, of course), I resigned myself to the fact that I had to stay outside on the platform until the guests of honor arrived.

“Is this even worth it? I’m not even going to get a decent shot and these hand warmers are pieces of crap.”

The fighting for position on the platform became a problem (everybody in print journalism knows that television people think they are better than newspaper people and therefore deserve to be treated like Elvis circa 1973) as we all stood watching, not hundreds but, thousands of people arriving to greet the Obamas and the Bidens. This wasn’t some small-town story I was covering – this was national news. Maybe even worldwide news.

“Maybe this is worth it?”

Everyone waited outside in the freezing cold until 1:00 p.m. – the anticipation was thrilling. At this point, my fingers and toes were starting to freeze, and I was beginning to get frostbite. As 1:00 p.m came and went, our future President was a no-show. He was late. We would have to wait some more. The combination of waiting for the 44th President, worrying if I was going to be able to get a decent shot, fighting with TV people and freezing to death was almost too much.

It’s no secret that during my time as a photojournalist I was filled with soul-crushing anxiety over whether or not I’d be able to do my job well. As I became skilled in that profession, my anxiety remained but then I had become worried about doing my job at the very high standard that I had set for myself. During that ten-year blur, I was obsessed with doing the best job I could possibly do. I took my profession seriously; one could almost say too seriously. I never stopped to enjoy it – I was always pushing myself to be the best I could be. This day was no exception. I HAD to get a good collection of photos of our nation’s next president. I had no choice. I had to do it for my editors, my publisher, my newspaper, my readers, my Facebook friends, my family, my friends and myself. I had to prove myself. In six-degree weather. With frostbite. Surrounded by people way more experienced and more equipped than I.

At 2:00 p.m., I got my chance. Here they came. Rock stars. The Obamas and the Bidens took the stage and the crowd roared. Surrounding the stage were giant American flags and Obama spoke to the crowd who didn’t seem to mind the weather. At this point, neither did I. I just started shooting. I never stopped. I took thousands of images that day hoping that the odds would be in my favor and that I’d get some that were pure magic. The platform we stood on was kind of far from the stage…but not too far. With my friend’s telephoto lens, I was actually able to get some decent shots. Barack was cool. The personification of cool.

After a half hour, Barack, Michelle, Joe and Jill said their farewells to the crowd. I, and many other members of the media who had been standing outside on that frigid January day, took off and started to walk back to our warm cars. On the way back my car, I was walking along and looking at the images I had just taken and saw that I had indeed taken some great shots. I couldn’t believe some of the stuff I had shot. Looking back, I guess it was pretty easy to capture the magic of President Barack Obama waving to a crowd of thousands of adoring fans in front of the biggest American flag I had ever seen. I also realize now that this day was the turning point in my career in photography – the moment where I stopped worrying if I could the job and when I began to worry about capturing this kind of magic all the time.

As I approached a corner with a traffic light, I, along with several other journalists including NBC’s Chuck Todd (now host of “Meet The Press”), were stopped by police officers. We were stopped because (“Holy Shit!”) President-elect Obama was crossing the street directly in front of us!

As the personification of cool crossed the street, he looked at us, smiled and waved.

“The President of the United States just waved at ME!”, I warmly thought to myself.

I stopped and enjoyed that. 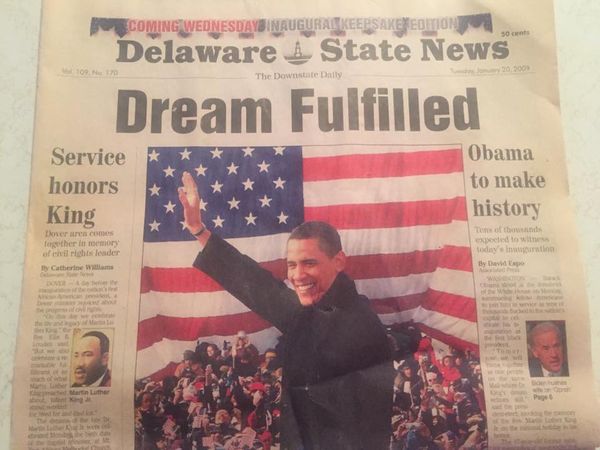 The best photo I took of President-elect Obama that day made the front page of the Delaware State News.