Jackpot at the End of the Trail 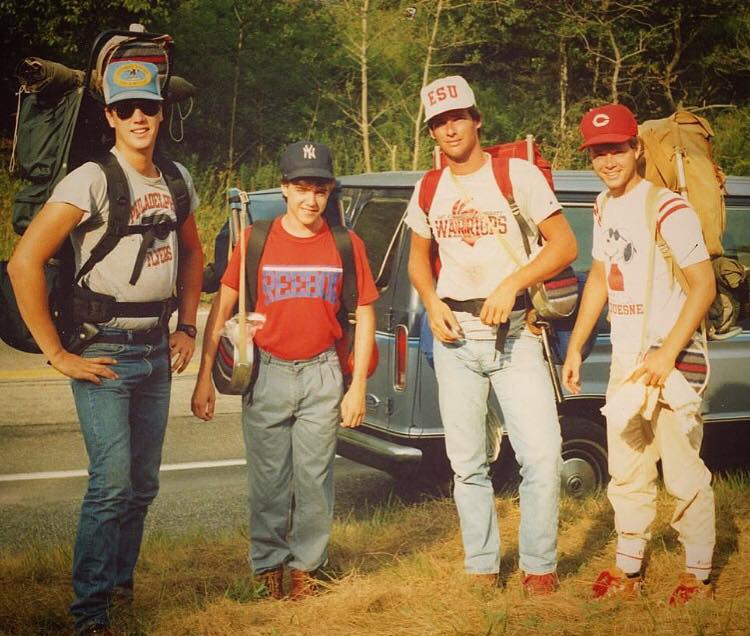 Summer 1988. Four 21-year old boys from Smyrna, Delaware attempt the ridiculous. Donnie Blow, Dave Chambers, Paul Cowan and Ben Mace plan to spend a weekend hiking a stretch of the Appalachian National Scenic Trail before starting their final year of college in the fall. Time is running out on the days of their youth and there are many adventures still to be had.

Friday evening, they drive Blow’s parents’ van to his family’s ski lodge near Stroudsburg, PA in good spirits drinking good spirits. Early Saturday morning, Mrs. Blow prepares a hearty French toast breakfast and shortly afterwards the four are dropped off by the side of a road in Wind Gap, PA (see attached photo) at the base of a mountain with plans to be picked up Monday evening over 30 miles away. Immediately the adventure begins as the two experienced (and the two tallest) hikers, Cowan and Blow begin to race up the mountain at a very brisk pace (“we gotta make good time!”) with Chambers and Mace (the two smallest) stumbling behind. Chambers is wearing Mace’s father’s old boots – two sizes too small.

As they reach the top of the steep incline at approximately 8am, Chambers vomits. Standing in French toast, the 100 pound novice is carrying over 50 pounds of unnecessary gear in his backpack along with several cans of unnecessary food including multiple tins of Chef Boyardee Ravioli. Cowan and Blow assist Chambers by relieving him of the heavy burden in his backpack and carrying most of it in theirs.

Now extremely high atop the mountain (at times over 1,600 feet) in extremely high temperatures (90+ degrees Fahrenheit), the trail has leveled off and the four adventurers find themselves dodging mosquitoes as they continue their very brisk pace (“we gotta make good time!”) on a trail full of rocks the size of large bricks sticking straight up from the ground. There was to be no sight-seeing on this trip…all eyes were on the uneven trail below their feet at all times to avoid tripping on the super-sized stones. And all four minds were on one thing – water.

Each hiker brought one canteen and each hiker recklessly finished theirs after approximately one hour into the adventure. “Don’t worry.” says Blow. “We can refill at a spot a few miles away.” When they arrive at the spot, the well is dry. No water. No cellphones in 1988. No means of communicating with the outside world. No transportation. They are alone, isolated, hot and thirsty.

“Don’t worry.” remarks Blow. “There’s another well a few more miles up the trail. I’m sure we can refill there.” Once again, the well is dry upon arrival. At this point, it’s mid-afternoon and the heat is almost unbearable. Cowan and Blow are still maintaining their very brisk pace (“we gotta make good time!”) but Chambers and Mace, usually two very funny guys who suddenly aren’t feeling so funny, are starting to lag behind.

At this point almost 15 miles along the rocky trail, Chambers loses all muscle control in his left leg and can no longer walk without assistance. Blow and Cowan venture ahead to pick out a campsite while an uncharacteristically-irritated Mace must help Chambers limp along at a snail’s pace. Mace is an Eagle Scout and knows they’re in jeopardy…Chambers is a Cub Scout dropout wishing he was back home watching “Jeopardy”.

By 5pm, Chambers and Mace arrive at the chosen campsite (1,530 feet high) and collapse onto the earth after walking almost 17 miles. Cowan has the task of removing Chambers’ boots and cutting, draining and bandaging the twenty water blisters on the novice’s inexperienced feet. After first aid was given, Cowan and Blow decide they must hike back down the mountain to find some water. If they don’t, it’s almost certain doom for the four Smyrna boys.

Chambers and Mace basically pass out from exhaustion but are awoken a couple hours later to the sound of voices crying in the wilderness “Storm’s comin’! Get the tents up!”. Cowan and Blow arrive with good news – full canteens….and bad news – a terrible thunderstorm is mere minutes away. As the four frantically assemble their shelters, which are simply old army tents (basically just some green canvas and some brown sticks), Cowan and Blow tell the tale of how they walked down the mountain in search of much needed H20. After marching down the perilous peak and emerging from the woods near Danielsville, PA, the first house they come across looked friendly and the mailbox in front had a name on it – Jack Potts. They had hit the jackpot!

Cowan and Blow knock on the door and when its opened Cowan collapses on the man’s floor as Blow begs for four full canteens worth of water. Mr. Potts obliges them but tells them not to return up the mountain due to the violent inclement weather forecasted in the area. Cowan and Blow tell their exasperated new friend they must return to save their two exhausted old friends asleep atop the mountain. After walking an additional three miles round trip, they arrive back at the campsite. They arrive with water. More water than they could possibly imagine.

Just as the tents are erected, the great storm begins. There was no time to cook any food…the four would have to eat their canned goods ice cold full of rainwater. And there would be no jolly songs around a campfire on this trip…only a wet hellscape of no escape. After the meals are quickly eaten, Cowan and Blow get inside one tent. Chambers and Mace in another. It rains from sundown to sunrise. Non-stop. The boys find themselves in soaking wet tents, in soaking wet sleeping bags, in soaking wet clothes, in soaking wet underwear resting in soaking wet puddles surrounded by very tall trees, on a very tall mountain, during a very violent electrical thunderstorm. Blow remarks to Cowan “You can only get so wet.” and amazingly proceeds to instantly fall asleep. Mace is quiet all night never uttering a word. He’s praying they will survive.

The next morning, Mace is the first to leave his tent and strips down to his underwear and sits in shell-shocked silence as his clothes dry in the morning sunlight. When the other three wake up, Mace is wearing his clothes and his trademark good-natured smile. He is ready to leave this bad nature behind. Cowan and Blow inform the other two that while at Mr. Potts’ place the previous night, they had called Blow’s parents and arranged for them to leave their van near Little Gap, PA about three miles away….the four hikers would have to cancel their trip early. Plans were aborted – it was time to go home.

After lagging behind the previous day, Chambers and Mace are determined to lead the way, while carefully rationing the water in their refilled canteens, and be the first down the mountain on that Sunday morning, Chambers especially. Cowan and Blow tell the other two to go on ahead and get a head start without them, they’d disassemble the campsite and meet up with them later.

It was Chambers and Mace’s turn to walk at a very brisk pace (“we gotta make good time!”)….that is…until the boulders. At the very end of the adventure, all that lies between them and freedom are boulders the size of cars. All stacked up one on top of the other. The trail had led them from dirt walkways through a woody wilderness to a sterile, stony place called Weathering Knob – a marked path along terrible topography that they’d have to climb along, climb through and climb down 1,400 feet (very carefully!) to leave the mountain. With that said, Chambers is the first to make it down the mountain (“we gotta make good time!)…with Mace a few steps behind.

Chambers and Mace wait by the side of Blue Mountain Drive at approximately 8am for the others to join them. They wait…but once again in silence. Stunned, neither speaks to the other. Both are very shaken by their 24-hour 20-mile ordeal. Cowan and Blow arrive shortly afterwards and they walk the extra mile into town to retrieve the van while the other two remain at the side of the road. Both refuse to walk another step. After about a half an hour, Chambers and Mace hear the sound of a horn blowing and see their two fellow adventurers holding cans of lukewarm beer out of the van’s windows as the vehicle approaches. Blow’s parents had stocked the air-conditioned van with a case of warm suds for the boys. (Blow likes warm beer…don’t ask. It doesn’t matter…they are homeward bound at last.)

But first, one more stop has to be made along the way. The boys decide to visit Mr. Jack Potts along Delps Road and share some of the beer with him as a thank you for his kindness the night before. Leaving the trail behind them, the pace of their adventure suddenly changes. No longer very brisk, the boys slowly take the long way home. (“we got all the time in the world!”)

As Blow drives his parents’ van home to Delaware, and as Chambers and Mace recuperate in the back (with 10ccs of Papst Blue Ribbon taken orally every 30 seconds), Cowan thinks this might be an appropriate time to break out the official 1988 Appalachian Trail Guide Book FOR THE FIRST TIME. Cowan reads aloud to his buddies, “Huh. It says here that the section of the trail that we hiked has no water in its wells during July and August and it’s also one of the rockiest and difficult to travel sections along the entire 2,184 mile trail. Huh.”

Chambers, who at this point would usually explode into a rage of venomous anger, just looks at Mace and smiles. Cowan and Blow shake their heads and chuckle. Without saying a word, all four men realize they now have a terrific tale to tell for the rest of their lives. They had made themselves a good time. They had hit the jackpot.