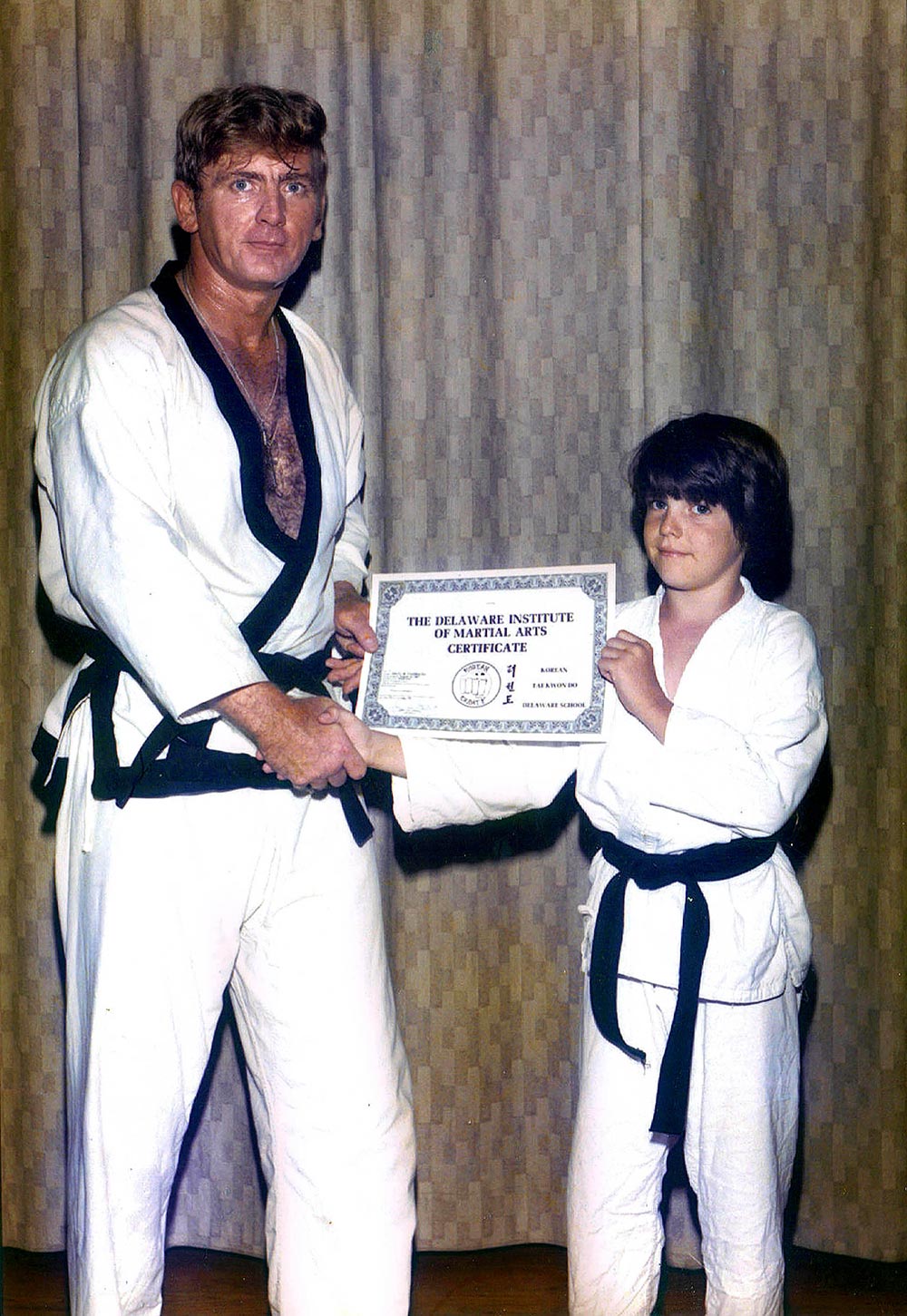 On Saturday, July 14, 1979, I became the first student to earn a black belt at the Delaware Institute of Martial Arts.   I was almost twelve years old.

Two years earlier, in July 1977, some neighborhood kids and I were riding bikes in back of Clayton Elementary School, which was conveniently located directly across the street from my childhood home on Main Street and where I was about to start the fifth grade, when we noticed the school gymnasium’s doors were open and something happening inside.

We observed a group of people wearing karate uniforms, known as “dobuks” and practicing a Korean martial art, known as Tae Kwon-Do.  In MY school’s gym!  Across from MY house!

In the age of Bruce Lee movies, Hong Kong Phooey, the tv show “Kung-Fu” and Carl Douglas’ infamous #1 hit single “Kung Fu Fighting” this was something special.   My friends and I noticed they practiced every Tuesday and Thursday evening and also on Saturday mornings.  We returned to watch them several more times that summer and eventually, it was just me watching.  A few days later, I was enrolled in the class.

Tae Kwon-Do isn’t some ancient form of self-defense – it was developed in the 1940s by Korean martial artists experienced in karate who wanted to create a new combative sport that featured jumping & spinning kicks and fast kicking & punching techniques.

The school was owned and operated by Delaware State Police trooper Jerry Lee Sterling who happened to be an old school friend of my father and also a third degree black belt.   Mr. Sterling was an intimidating figure, to say the least, and he reminded me of Elvis Presley, also a student of karate, who died on August 16, 1977 shortly after I began in the class.   Mr. Sterling would often sing snippets of songs during class…for example, he led the class in singing “Happy Birthday to You” to me on the night I turned celebrated my tenth birthday.

I began as a white belt and my class rank was “18th” which meant there were seventeen students with more seniority ahead of me.  Students of all ages, genders and races participated in the school, at that time known as Kent County School of Martial Arts, but I was the youngest in the class.  I was only 4½ feet tall and weighed a mere 75 pounds soaking wet.   There were many advantages to being a student of karate – you could learn to defend yourself while becoming physically fit, mentally strong and self-confident…plus, girls just love a boy in a sharp dobuk.

One of the first things Mr. Sterling taught his new students were the five tenants of Tae Kwon-Do. (Courtesy, Integrity, Perseverance, Self-Control and Indomitable Spirit)  These five tenants are a model for a student’s behavior.  It is through these guiding principles that one’s character is developed and nourished. Every Tae Kwon-Do student must memorize the tenets and apply each belief into their life.

A typical class would usually be 2½ hours long and consist of physical fitness exercises, practicing kicking techniques, punches & blocks and…free sparring.  Free sparring is a practice fight using gloves and foot gear.  (No head gear in those days)    Sparring helps students practice their skills (kicks, punches and blocks), gain confidence and lose their fear of getting hit.  As the youngest in the class, I would always have to spar with an adult – some of whom would really beat the crap out of me…just for kicks.

Students would also learn and perform “patterns” or “katas” – a series of standardized movements used to practice offensive and defensive techniques without a partner.  Patterns are also used to improve strength & conditioning, balance, focus & concentration. Students must perform the intricate and complex movements correctly in order to pass belt tests.

Two months after I joined the class I tested for my Yellow stripe (a yellow stripe on a white belt) and I had to learn the first pattern – Chon-Ji.  I passed.  Every 2-3 months afterwards, I learned a new pattern for my next test (Yellow belt – Dan-Gun,  Green stripe – Do-San,  Green belt – Won-Hyo,  Blue stripe – Yul-Gok,  Blue Belt – Joong-Gun,  Red stripe – Toi-Gye,  Red belt – Hwa-Rang and Black stripe – Choong-Moo).  Nine patterns in all.

The highlight of each test was, of course, board-breaking.  In order to pass your belt test, each student had to break a certain number of boards (1” thick pine boards) with kicks and/or punches.  Sometimes the boards were dry and light as a feather and therefore very easy to break, sometimes they were damp and heavy and unfortunately very hard to break.   It was by far, the most difficult part of each test.  Always saved until the final moments, board-breaking could make the coolest, most confident students break out into a red-hot anxious panic.

By the time of my Black belt test, Kent County School of Martial Arts had become the Delaware Institute of Martial Arts, I had just finished the sixth grade at Smyrna Middle School and my class rank was “1st”, the seventeen students ahead of me when I first joined had all dropped out and quit.  Membership in the school had doubled over the past two years and there were now several younger students enrolled – some as young as 8 years old.

On the morning of July 14, 1979, I was more nervous and anxious than I had ever been in my entire 11-year and 11-month old life.  This was it.  Mr. Sterling actually referred to it as “D-Day” (“D” for Dave.)   In fact, I was so nervous that I asked my parents not to make the trip across Main Street to watch me test – something I regret to this day.  I would do it alone.

The test began at the end of a normal Saturday class with a courteous bow to Mr. Sterling and then…calisthenics.  I had to do sixty push-ups on my fists – the first two knuckles of the fist actually (pointer finger and middle finger…go on, you try it!), sixty sit-ups – with an adult holding my feet flat to the floor and finally, sixty simple jumping jacks.

Next up were the patterns.  I had to perform all nine patterns that I had learned over the past 24 months perfectly…Chon-Ji to Choong-Moo.  No mistakes.  As I executed the movements to one pattern, I realized that I had made an error and asked if I could start over from the beginning.  Mr. Sterling obliged and complimented my integrity.

After I had completed all nine patterns, it was time for free-sparring.  I had to spar with Mr. Sterling himself…in front of the entire class.  This was very intimidating but I knew I had to persevere.  I didn’t buckle under the pressure and just strove to do the best I could.  (He took it easy on me, of course.)

Only one more set of boards to go…three boards with a side piercing kick.  This proved to not be so easy.  I had never broken three boards before. On the first try, I failed.  On the second try, I failed.  I kicked the fingers of the guys holding the boards, including Mr. Sterling’s.   One time I missed the boards all together.  I couldn’t do it.  I was going to fail.   I had come this far only to fail in the final moments.   This portion of the test was taking so long that other students began to pack up and go home.   Mr. Sterling himself was getting frustrated at my lack of success and had suggested that we quit.  Elvis wanted to quit!?   I was physically, mentally and emotionally exhausted.

Then I remembered that people described as having indomitable spirits can’t be defeated…they never give up in spite of the situation and their personal outcome…their strength comes from within.  Never give up!   I looked Mr. Sterling in the eye, took a deep breath, straightened my dobuk and proceeded to put my foot through three inches of pine with a slicing side piercing kick.   No one else was watching, they had all gone home.

Mr. Sterling tossed the broken boards into the air in celebration, broke into song and hugged me.  After thanking him, all I remember afterwards is waving my new belt over my head as I ran home to show my parents.  I was almost as proud of my achievement as they were, my father especially so.   I remember how much he bragged about it to anyone who would listen for the rest of his life.  “My son was the first student to earn a black belt at the Delaware Institute of Martial Arts!  And he did it when he was almost twelve years old!” he’d often repeat.

However, the most important things I remember from that day are…”courtesy, integrity, perseverance, self-control and indomitable spirit”.   When you’re put to the test, as we all are every day, they’re all you really need to succeed.   I’ve never forgotten them.